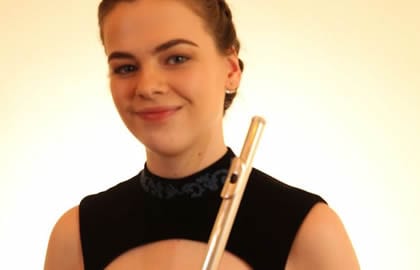 Flautist Imogen Davey hit all the right notes to be crowned Kirklees Young Musician of the Year.

She beat off strong competition from four other young musicians to win the coveted title.

And it was second time lucky for Imogen, from Marsden, who took part in the contest last year.

Ray Brown, one of the festival’s organisers, commented: “She played very well and there was quite a decent audience for her.

“It was an extremely good standard and the adjudicator said that it was extremely difficult to choose somebody.”

She has previously won prizes for her performances at St John’s Smith Square in London and further a field in the Netherlands.

Other musicians taking part in the contest were violinist Abigail Askew from the Royal Welsh College of Music in Cardiff, Sarah Bush, a violinist and University of Huddersfield music student.

They were joined by pianist Francisco Marques, originally from Portugal and also a University of Huddersfield Student, and Matthew Rhodes, who plays the saxophone and is from Scholes in Cleckheaton.

As winner Imogen receives £1,000 and a trophy which will presented to her following her performance tonight at the gala concert.

The event will bring this year’s festival to a close and also feature some of the top talent seen by audiences this year as well as a competition between the winners of today’s chor classes.