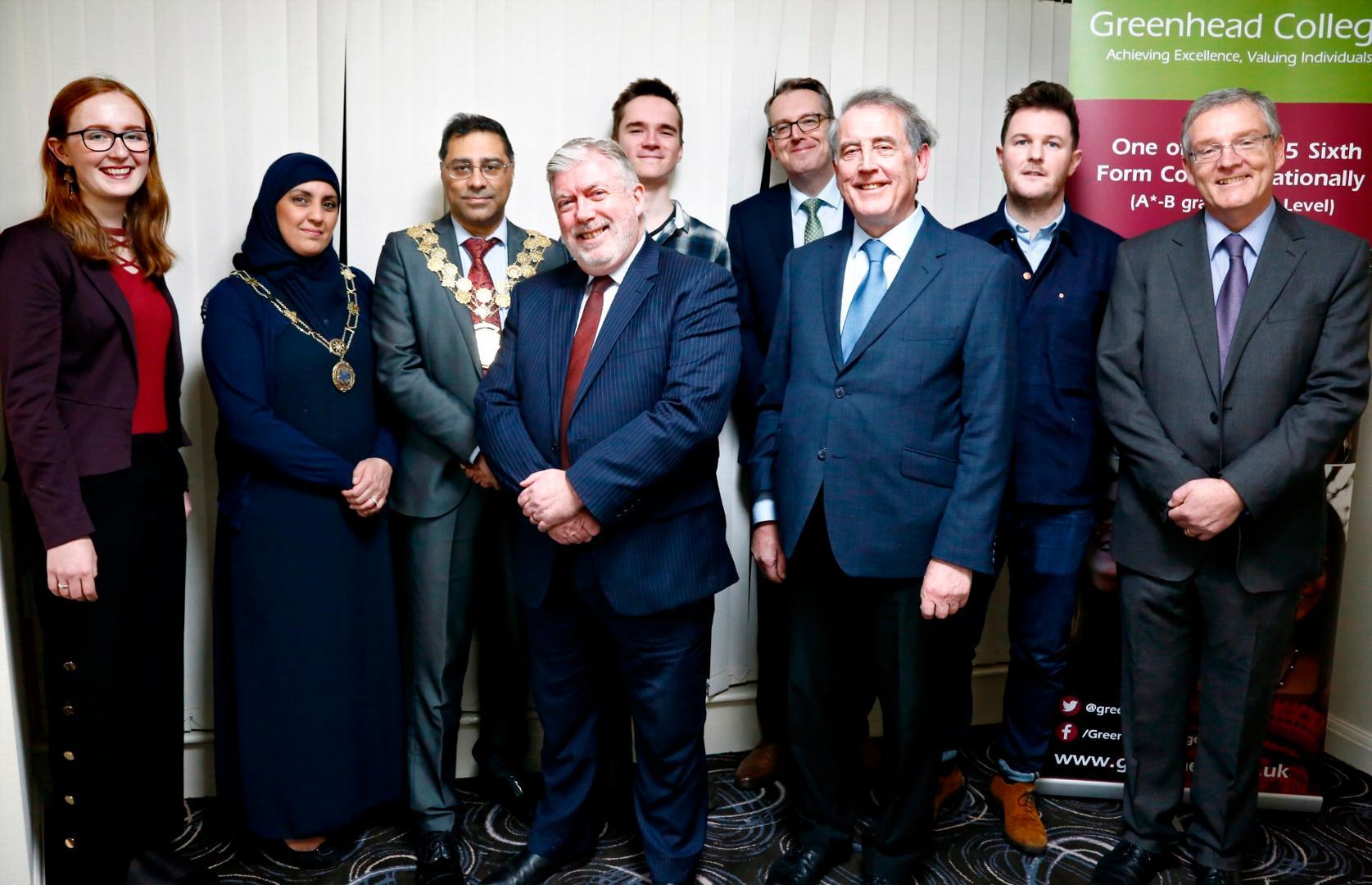 Greenhead College welcomed back their Class of 2019 on Thursday 19th December for their annual College Awards and Reunion Evening.

The formal event was held at the John Smith’s Stadium and was an opportunity for the College to celebrate the hard work and outstanding results of their recent leavers. The A Level results in Summer 2019 saw Greenhead College remain the Number 1 A Level College in Yorkshire for A*-B grades at A Level, a position they have held for many years. They were once again placed as one of the Top 5 Sixth Form Colleges Nationally for the same criteria.

The guests were greeted to a performance by the College’s Jazz band and Chair of Governors, Richard Armstrong opened the ceremony. Principal of the College, Simon Lett followed with a round-up of the 2018/19 college year showcasing the impressive talent amongst the year group.

The special guest of the evening and presenter of the awards was Ian Berry, former Greenhead College student and world famous Denim Artist. Ian spoke about his time at Greenhead College and his success as an Artist which was certainly inspiring to the recent leavers who are embarking on the next stage of their career journeys.

Awards were given for each individual subject plus a handful of special recognition and achievement awards. Roshni Parmar-Hill, who has been shortlisted for the national British Education Awards in the A Level category, was amongst the winners taking home the History prize.

The evening concluded with a performance by the College’s recent Battle of the Bands winner ‘The Free Radicals’.

“Our annual reunion and awards evening is always a highlight of the Greenhead College year. It was great to welcome back so many former students and to hear how well they are now doing in the next stage of their education and training. We wish them every success for the future.”

The College would like to thank all the individuals and organisations who sponsored a prize for the event. 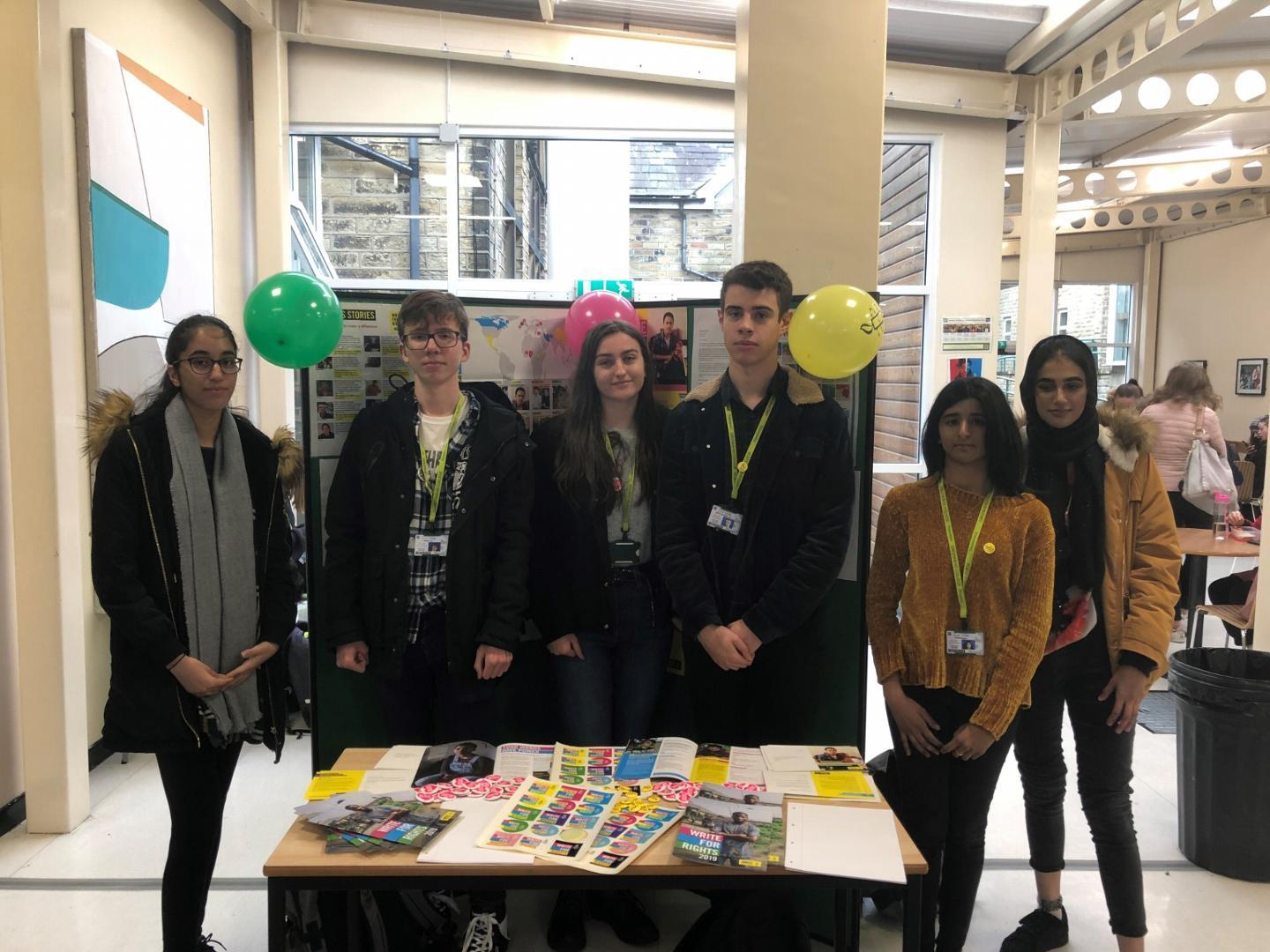 Greenhead College’s Amnesty Enrichment group recently held a Write for Rights campaign in College to support and fight for the rights of those whose basic human rights are being attacked. Write for Rights is a global campaign taking place throughout December and is Amnesty’s biggest Human Rights Campaign.

Throughout the lunchtime, the College’s Amnesty group spent time speaking to students and encouraging them to write letters and sign petitions to put pressure on governments, institutions and decision-makers to do the right thing.

Just one example of people in which our students are supporting are Sarah and Seán, who are facing a lengthy prison sentence for helping save refugees from drowning in the waters around Lesvos. Their humanitarian work saved lives, but like many others across Europe, they are being criminalised for helping refugees. The pair risk facing up to 25 years in prison on ‘people smuggling’ charges. They already spent more than 100 days in prison before being released on bail in December 2018.

The event provided our students with an insight into the injustices happening all around the world. Students showed huge amounts of compassion and desire to help those in need by signing various petitions on the Amnesty website.

If you would like to get involved with the campaign please visit https://www.amnesty.org/en/get-involved/write-for-rights/.

We are thrilled to reveal that former Greenhead College student Roshni Parmar-Hill has been shortlisted for a prestigious British Education Award in recognition of her outstanding academic and extra-curricular success in the A Level category.

This is the third year in a row that a Greenhead College student has made the shortlist for this award following Grace Goswami and Shaun Marshall who were both announced as the winners in 2018 and 2019’s ceremonies. Could this be a hat trick for Greenhead? We will soon find out as the winners will be revealed at the official awards ceremony on Thursday 30th January 2020.

Roshni was nominated for this award by Greenhead College following her outstanding A Level success of four A* grades in History, Philosophy, Religion & Ethics, English Literature and the Extended Project Qualification, plus her participation in a number of endeavours both in and outside of college.

Passionate about helping others and promoting equality, Roshni has relished every opportunity to do so.

An elected member of Youth Parliament, Roshni passionately debated for Votes at 16 in the House of Commons which she then discussed further on National Television on the BBC’s Sunday Politics.

Roshni was also the leader of the UK delegation at the IMEP in Madrid, bringing together all member states from the EU to create a model experience of the European Parliament. Part of the FEMM committee, Roshni helped produce a resolution that is now official EU documentation. In September 2019 Roshni attended the European Parliament in Brussels for an ‘aspiring young female leaders’ project.

Other notable achievements include winning the award for Best Actress in the North West for her role of Anne Frank, being an Ambassador for Hope not Hate and her continuous voluntary work at both Oxfam and at Oldham Unity, a project to help refugees and asylum seekers when they have nowhere else to turn, providing them with clothes, food and support.

“We are all absolutely thrilled to hear that Roshni has been shortlisted for this prestigious award. She excelled academically during her time at Greenhead and threw herself into a wide range of extracurricular activities – she is fully deserving of this special recognition. This is the third year in a row that our College has been shortlisted in the A Level (zone 1) category for ‘Student of the Year’. Last year, Shaun Marshall was the deserving recipient of the award and in 2018, Grace Goswami was the winner. In 2020, we hope to score a hat trick and win this award three years in succession!”

To laugh, to be challenged, to be entertained and delighted.

Exploring environmentalism, sustainability and human responsibility, we will weave together children’s classics. Taking our audience on a magical journey through mysterious forests, desolate plains and deepest darkest caves, we ask the questions how do we treat our natural resources and each other in an increasingly consumer driven world?

Made up of 40 students plus staff members, our cast and crew have worked hard to create a fantastic up-cycled set, thrifted costumes and will even be using cruelty free make up.

This fun and educational performance is perfect for all an audience of all ages so come along with your children/younger siblings and enjoy the show!

Tickets are available to purchase from the College Finance Office and are priced at £8 for adults and £5 for concessions.