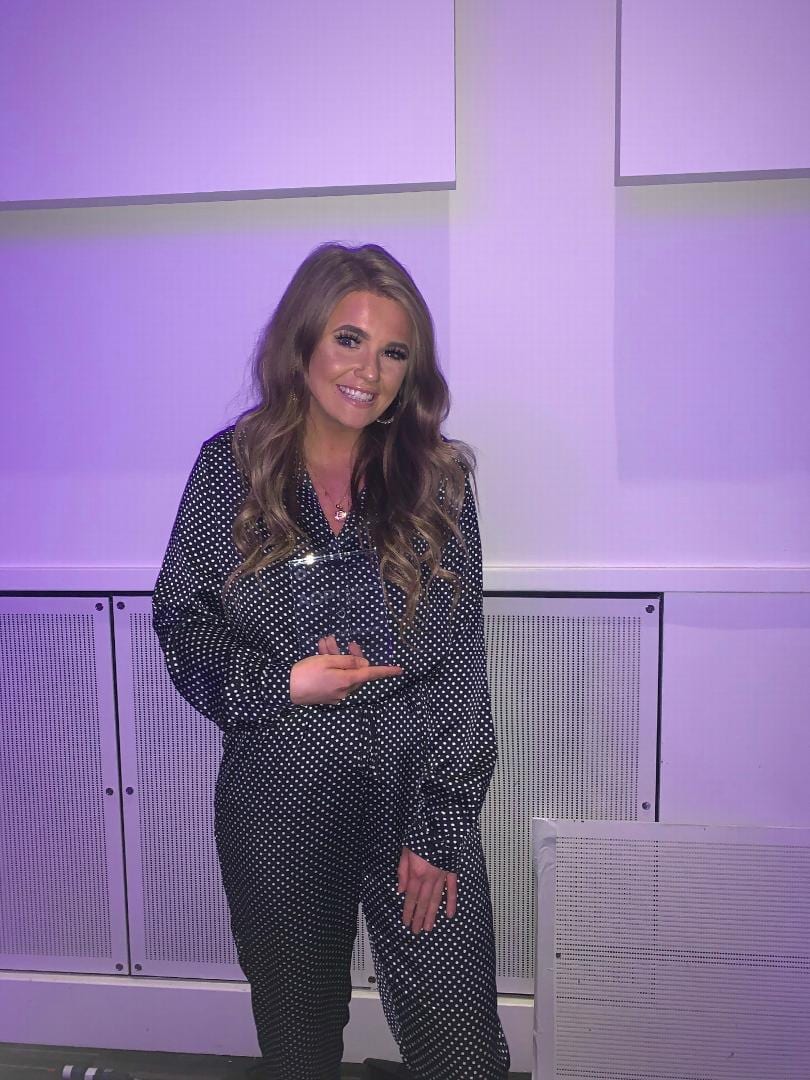 Emily, who studied Biology, Chemistry and Maths at Greenhead College from 2014 to 2016 before pursuing Optometry at the University of Manchester, has been announced as the winner in the Student of the Year category in the AOP Awards 2020, which is organised by the Association of Optometrists (AOP).

Emily’s award recognises her hard-work and dedication to Optometry. In her second year she was the Opsoc President where she organised study and support sessions for first year students. She is also currently the British Contact Lens Association (BCLA) representative and a Senior Student Ambassador for the university. Passionate about volunteering, Emily spends her spare time taking groups of people with disabilities on fun days out.  She says:

“It’s a great way to meet new people, gain new skills and find out things about yourself. It’ll help you meet people from so many different backgrounds which will help you in your profession and beyond!”

“Winning this award proves that hard work really does pay off. It is not only my award, but an award for absolutely everyone in optometry at the University of Manchester because they are so amazing and inspiring. It’s a real honour being a representative for them and a  highlight  of my university journey so far, and hopefully inspires other student optometrists to get out there and give everything their best shot.”

The Awards, now in its ninth year, recognises the highest levels of achievement in UK optics. The Student of the Year accolade recognises an optometry student, dispensing optician student or pre-registration optometrist who can demonstrate initiative and drive to improve their fellow students’ participation in, and awareness of, optical issues.

“The AOP Awards shines a spotlight on the extraordinary individuals and teams who are propelling the profession forward with their knowledge, expertise, dedication and passion. This year is no different – with all the winners, and indeed finalists, giving an impressive account for optometry, I wish them every success in the future.” 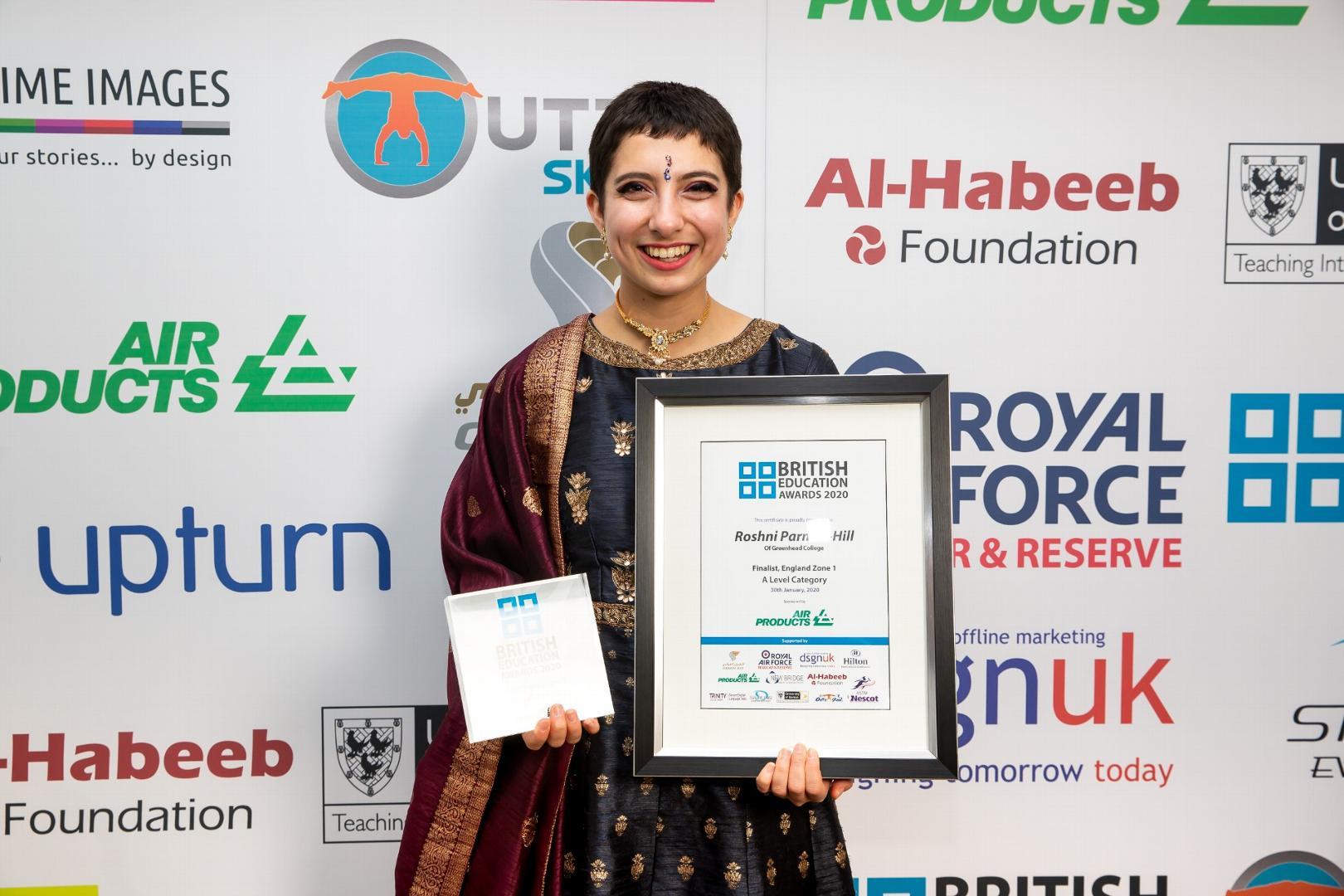 Former Greenhead College Student, Roshni Parmar-Hill was announced the winner of a British Education Award in the A Level, North of England category on Thursday 30th January 2020.

The prestigious British Education Awards, held at the Hilton Hotel in Manchester, identify and celebrate individuals who have excelled within the British education system.

2020 sees the third year running that a student from Greenhead College has won this prestigious award. In 2018 former student Grace Goswami was announced the winner and in 2019 the deserving recipient was Shaun Marshall.

Commenting on the hat trick of awards, Simon Lett who is principal at Greenhead College said:

“This is astounding news for the College.  To have won this award three years in succession is an incredible achievement.  Our best wishes go to Roshni who is fully deserving of this prestigious award.”

Roshni, who now reads History at Cambridge University, was nominated for this award by the college following her outstanding A Level success of four A* grades in History, Philosophy, Religion & Ethics, English Literature and the Extended Project Qualification, plus her impressive participation in a number of endeavours both in and outside of college.

An elected member of Youth Parliament, Roshni passionately debated for Votes at 16 in the House of Commons which she then discussed further on National Television on the BBC’s Sunday Politics.

Roshni was also the leader of the UK delegation at the IMEP in Madrid, bringing together all member states from the EU to create a model experience of the European Parliament. Part of the FEMM committee, Roshni helped produce a resolution that is now official EU documentation. In September 2019 Roshni attended the European Parliament in Brussels for an ‘aspiring young female leaders’ project.

Other notable achievements include winning the award for Best Actress in the North West for her role of Anne Frank, being an Ambassador for Hope not Hate and her continuous voluntary work at both Oxfam and at Oldham Unity, a project to help refugees and asylum seekers when they have nowhere else to turn, providing them with clothes, food and support.

Commenting on her win, Roshni said:

‘I really can’t say that I am the winner of the British Education Awards because it wasn’t just me behind the success. This award goes to the whole of Greenhead who has empowered and inspired me to think beyond the conventional. Without the support, teaching and environment the college offered me, I would not be in the place I am today – and last Thursday proved that. Being able to celebrate with a few of the teachers that helped me in my two years at college was the greatest reward of the Evening, and I hope that what I have done has shown others that all it takes is the openness to be yourself and the ability to let others help you on the way!’