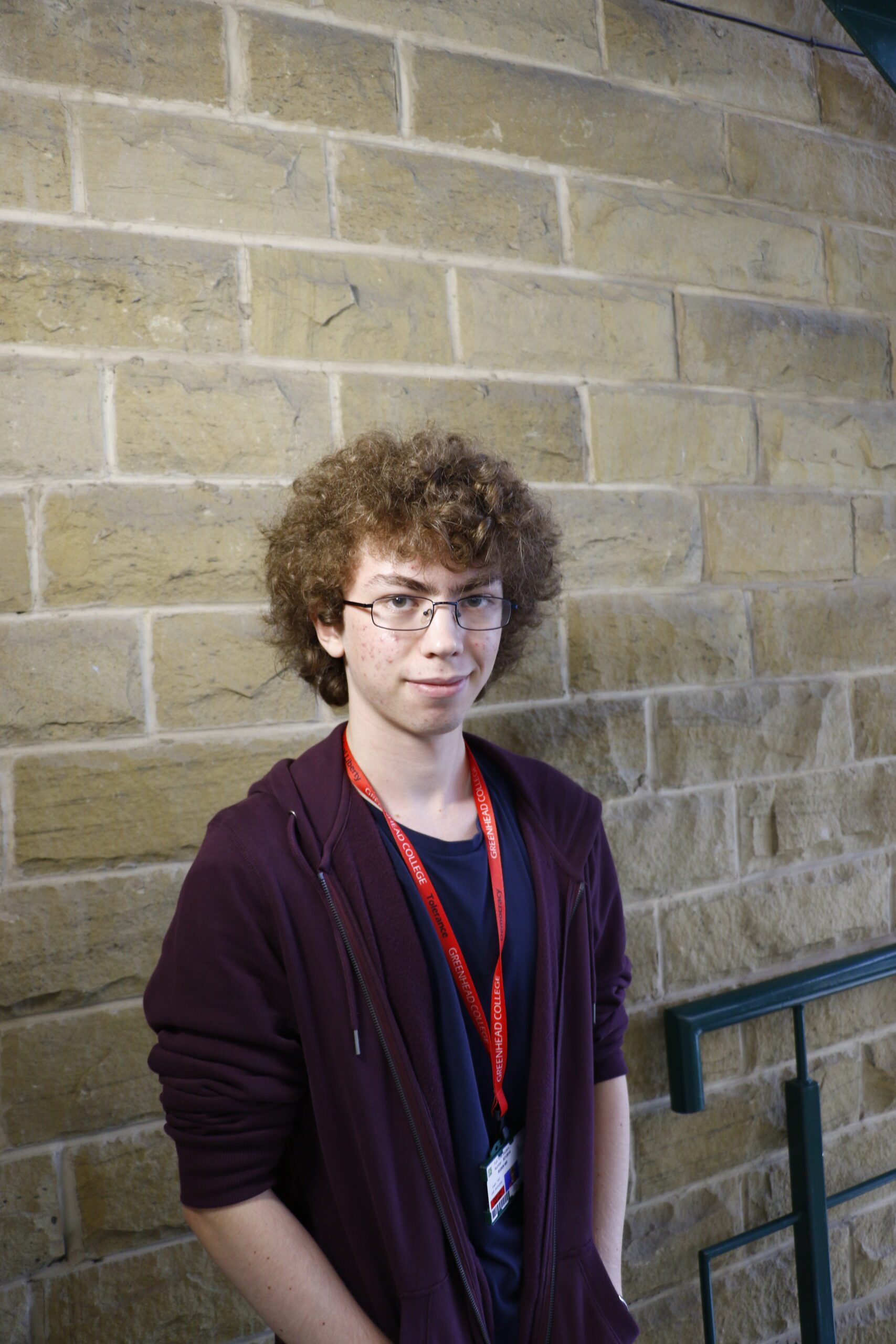 By Will Rudkin, A1 student

College. It’s a point in life that you always know will be coming, but when it hits you realise how much time has passed. Especially with the global situation of the coronavirus, college rushed towards me faster than expected – one minute I’m sitting in a classroom in March of 2020, with a year and a half to go before my GCSE’s, the next minute, I’ve had countless online lessons, barely been in school for learning and now my mocks are taking place (it was like being hit by a bullet train of the prospect of the future). With the sheer amount of time that I wasn’t in school, the aspect of college that still felt so far away has suddenly caught up with me.

I’d always wanted to go to Greenhead College – living in Huddersfield, with my older brother already taking his subjects there, not to mention that it is one of the highest rated colleges in the area – who wouldn’t? Choosing subjects however, that was a lot harder to decide on. Will I enjoy the subjects? What’re my friends doing? How hard will it be? These thoughts were going through my, and I’m sure many others, heads as I was choosing. Ending up picking English Language, Classical Civilisation and Modern History, three essay subjects, I was quickly heading toward starting at Greenhead, something that brought in many emotions – nerves, fears, anxiousness – but most of all, it brought excitement of the opportunity that I was about to experience, something I’m sure many Greenhead College students were feeling when we walked through the entrance (before getting immediately lost in the sprawling campus – honestly, does the map of the college have to be that confusing?).

One of the biggest highlights that I found was meeting new people. Personally, my high school was very small compared to many public ones, and I had only 60 people in my year; moving up to being surrounded by over a thousand was definitely a big change. But with that new change came a bunch of new friends – I know that a main point of nerves for many new students starting college is the fact that you may not be sharing any lessons with people that you know. However, while new people can be a scary concept, it was actually one of the things I enjoyed the most about Greenhead; meeting new people in all my subjects, and expanding my circle of friends through that was an amazing start, especially within the friendly atmosphere that Greenhead College promotes.

Having new lessons is also a concept that at first made me nervous, especially when doing a subject that I had never done at GCSE, but I soon found out that there was nothing to fear. The teachers, for a start, were incredible – welcoming, friendly and focused, from the energy of Ian’s magnetic English lessons to the fun, laid-back nature of my Classics lessons run by Jodie. The actual content of the subjects also played on my mind beforehand – would it be boring? Intriguing? Fascinating? – but to my delight, the points of focus were all really interesting and engaging, like the rise and fall of Tsarism in Russia, or the beginning of the story of the Iliad. I’m sure this was the same for everyone at Greenhead, no matter the subject; everything felt exciting and unique and new. That’s the most amazing thing about the start of the experience – it felt new. A fresh start. And I guarantee that college is infinitely more enjoyable than high school for basically everyone in Greenhead. Now, one half-term has been completed, and it’s been a blast. It feels like it has gone so quickly, and yet I’ve already gotten into the swing of things. New campus, new subjects, new friends, everything – I thought that college was going to be like falling off of a cliff into stress, instead it was as if there was a bed of pillows at the bottom, labelled “Greenhead College’s atmosphere.” Everything that they offer, the experience that it has already brought, the exciting prospect of the future; if you are considering going to Greenhead, then I would highly recommend it – you won’t regret your choice.