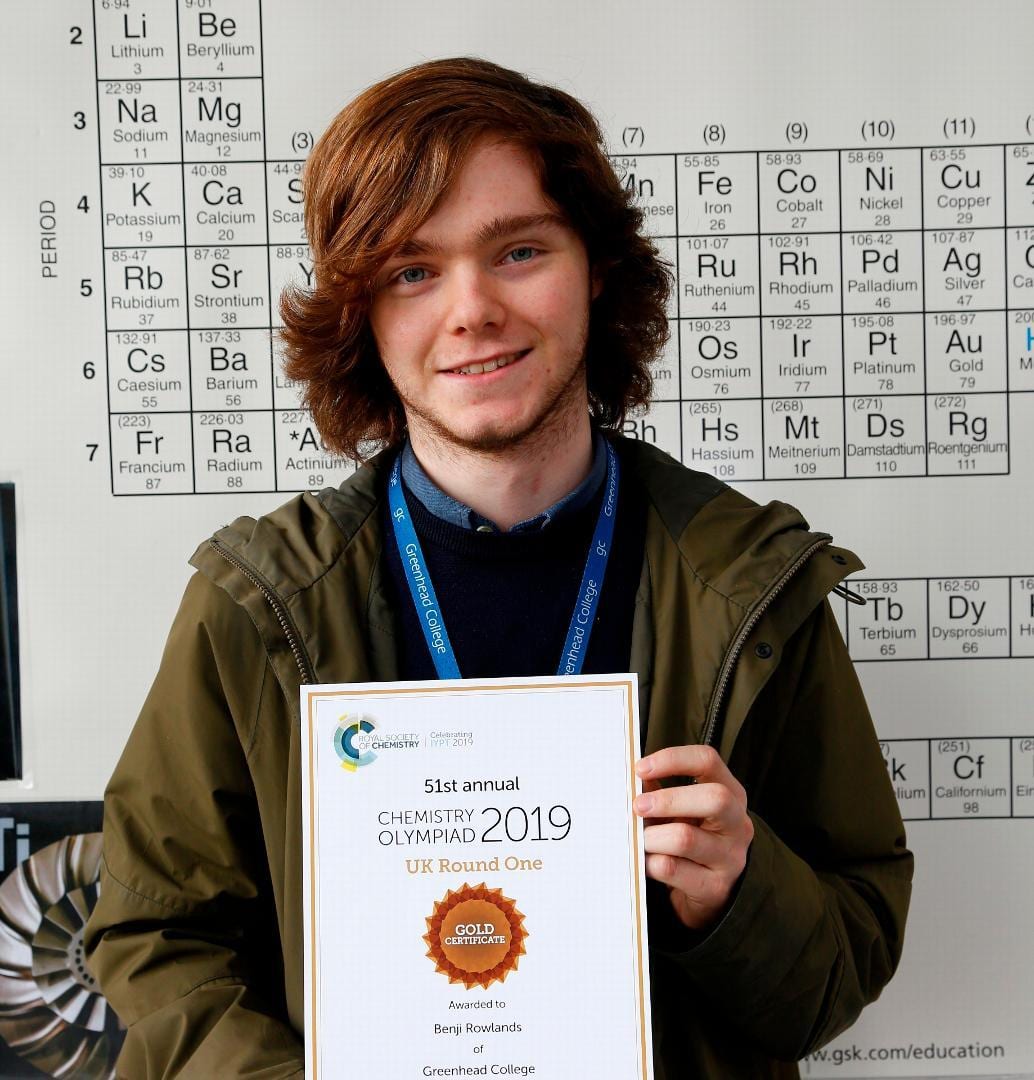 Greenhead College student Benji Rowlands is set to represent the UK at the International Finals of the Chemistry Olympiad following his success in the national finals.

Benji, along with 10 other Greenhead College students, participated in round 1 of the Olympiad back in January 2019 and was placed within the top 28 of all students nationally qualifying him to round 2 of the competition held in Cambridge at the end of March.

Round 2 consisted of a residential weekend at Cambridge University, where the competitors had to undertake a 4 hour practical exam and a 4 hour theoretical exam demonstrating their knowledge of highly advanced chemistry topics.

The students had the opportunity to socialise with the academics who make up the UK Olympiad committee which included dinners at St Catherine’s College, Cambridge and a trip to Pizza Express.

Once the marks were in it was announced that out of the 28 students who sat the exams, Benji had qualified to represent the UK at the 2019 Chemistry Olympiad International Finals, alongside 3 other students.

“We are immensely proud of Benji for making it to the International Finals of the Chemistry Olympiad. This places Benji in the top 4 chemistry students of his age group in the whole of the UK! He is the most able student I have taught in my 25 years of teaching and I wish him every success in the finals.”

The finals will take place in Paris this July 2019. Good luck Benji! 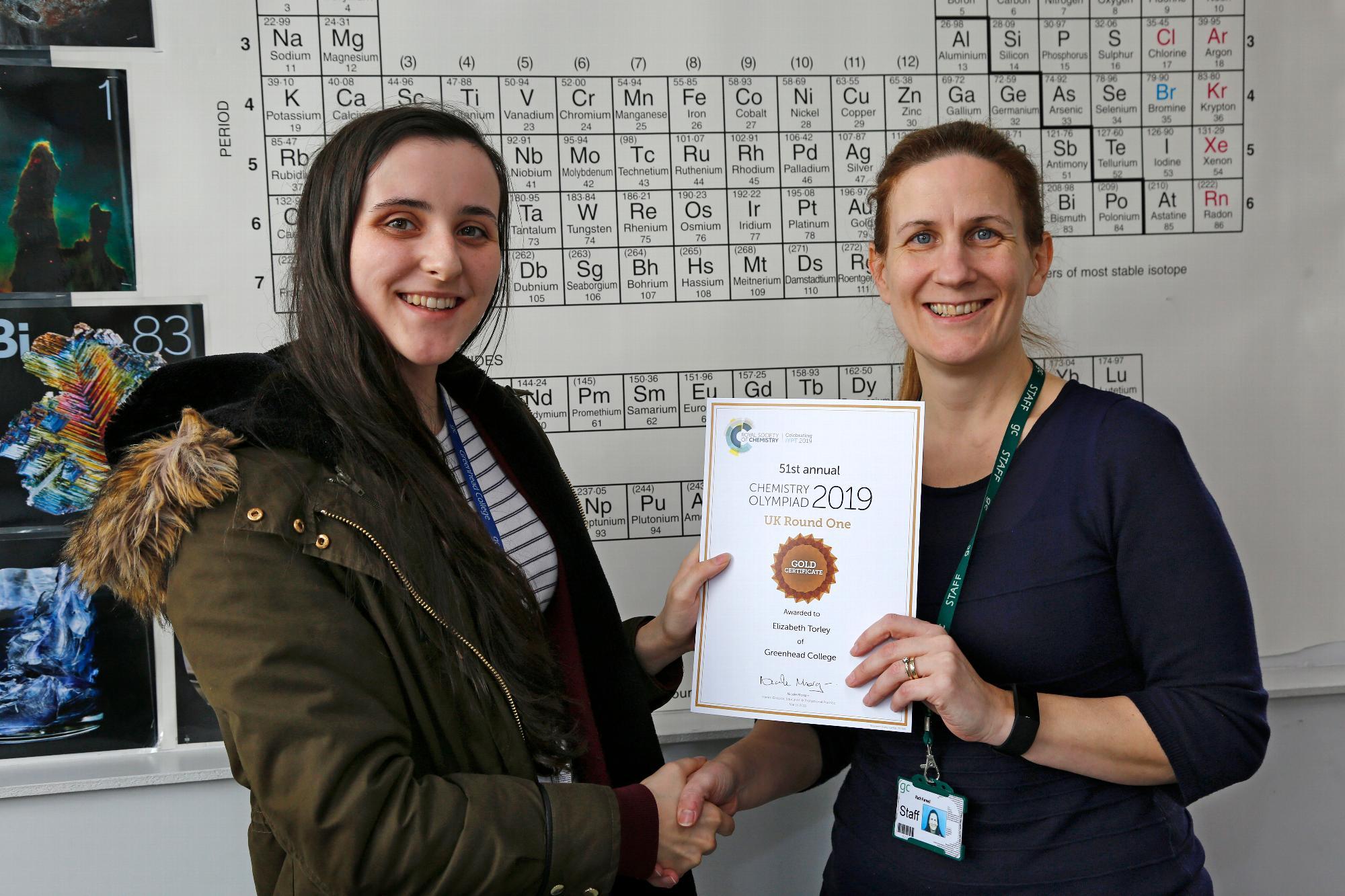 This year, 11 students took part in the Chemistry Olympiad, the UK’s leading Chemistry competition run by the Royal Society of Chemistry.

The competition involved a 2 hour written test of the student’s chemical knowledge, based on real-world chemistry problems. It is a fantastic opportunity for student’s to develop some of the skills required at University and beyond.

This is an outstanding achievement for our budding Chemists and one they should all be extremely proud of.

Student Benji Rowlands did so well in the competition he was placed in the top 28 nationally and sailed through to the second round at Cambridge University to compete in a selection process for the International Finals. There will be updates on Benji’s progress very soon!

Our Chemistry students have been working alongside staff and post-graduate students from the School of Applied Sciences at The University of Huddersfield since September 2017, researching how chemistry can address real world issues. The research culminated with presentation of the teams’ findings at the workshop.

The event was attended by an invited audience of parents and representatives from local schools, industry, universities and national STEM organisations, as well as the Mayor of Kirklees Cllr Christine Iredale and her consort Mr Iredale. Despite the heavy snowfall in the morning of the event, the turnout was fantastic.

The students treated the audience to presentations on various topics including; Catalysis, Solar Cells, Carbon Capture and Utilisation, Medicinal Chemistry and Antibiotic Resistance. They delivered with such confidence and knowledge about their chosen topics and really engaged with the audience. A pleasure to watch!

During the interval the audience had the opportunity to meet and talk with the students who had displayed posters, summarizing their research, around the room. There were some great in-depth discussions about their findings, and the feedback was excellent.

There were also talks from two guest speakers; Alice Berry from Syngenta, who described her experience working in the chemical industry, and Professor Jane Owen-Lynch from The University of Huddersfield who discussed exciting developments at the School of Applied Sciences, including new facilities for outreach to local schools and colleges.

‘It’s been fabulous working with such a talented group of students, watching their knowledge and confidence grow during the Real World Chemistry project. They all presented brilliantly. I’ve had so much positive feedback about their talks, posters and discussions with guests. They’ve impressed a lot of people and should be very proud of themselves.’

Thank you, on behalf of Greenhead College, to all those who attended the event, the students, the University of Huddersfield, Alice Berry, Professor Jane Owen-Lynch and Stuart Strathdee and the Chemistry department for making this project a huge success!